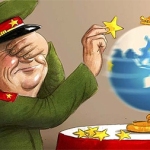 English: This map is an approximate presentation of PRC and other regional claims. China has remained ambiguous on the extent and legal justification for these regional claims. Three of China‟s major ongoing territorial disputes are based on claims along its shared border with India and Bhutan, the South China Sea, and with Japan in the East China Sea. (Photo credit: Wikipedia)

With international risk managers looking at Russia’s war games perhaps we should not forget China? This reblog should jog memories. But the real ‘elephant in the room for risk managers is in Washington. Do the nationalists or the globalists hold greater sway in Trump’s government?

The total area of China’s claims on other countries exceeds the size of modern China itself, but Beijing refuses to budge on its claims.

Many are based on unsubstantiated (outside China) and unprecedented “historical precedents” dating back centuries.

And while China only has land borders with 14 countries, it is claiming territory from at least 23 individual nations.

These include Indonesia, Malaysia and Brunei, maritime territory which is 1000 kilometres from the closest Chinese soil (well outside the internationally recognised 200 kilometre EEZ).

The following is a list of China’s current claims against other countries, all of which it has made painfully clear it is willing to go to war over:

Afghan province of Bahdashan (despite treaty of 1963, China still encroaches on Afghan territory).